TabTab, is a mobile eSports games platform, connecting the 2.5+ billion mobile gamers around the world through mobile games, contests, rewards, and cryptocurrency.

TabTab, is a mobile gaming app for Android and iPhone. In the app users earn reward tokens called ARCADE by playing games, watching videos, and competing in contests. Users can trade ARCADE for other crytocurrency or use it to redeem prizes.

Mobile games are free for users to play and earn reward tokens.

Contests are free to join and users compete to earn more reward tokens.

TabTab ARCADE tokens and Stellar Lumens (XLM) cryptocurrencies can be stored in the app's crypto wallet.

Users can trade ARCADE tokens and Stellar Lumens within the app's decentralized exchange.

Play games for free. Join a contest and compete against other mobile gamers around the world. 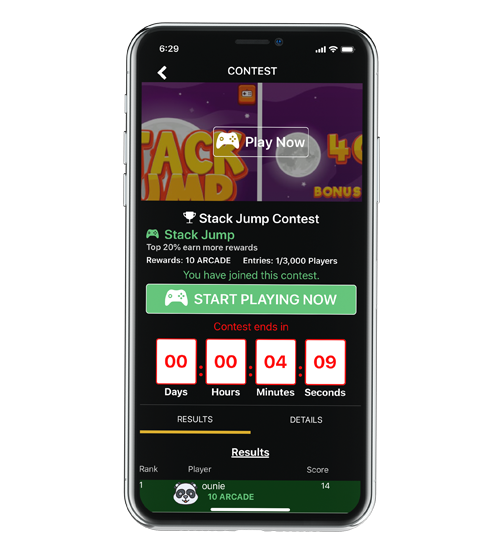 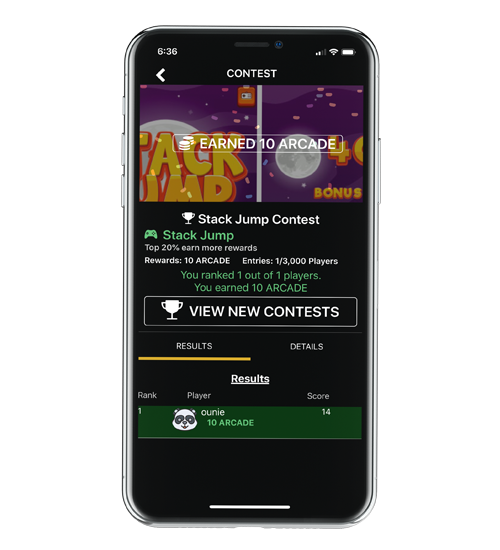 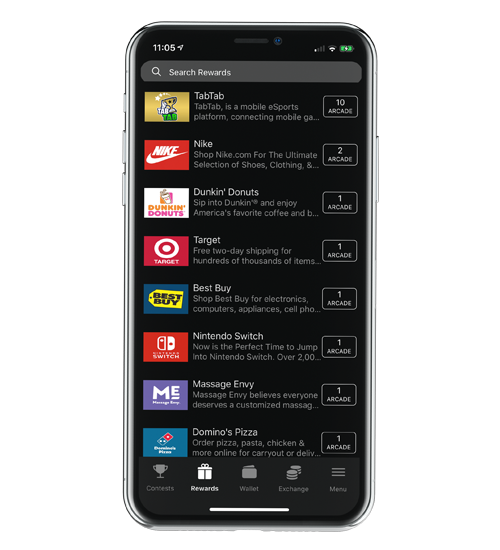 Advertisers and marketers pay you for your attention.

TabTab ARCADE tokens are cryptocurrency on the Stellar blockchain.

Cash out Stellar Lumens (XLM) for $USD or other fiat on crypto exchanges like Coinbase. 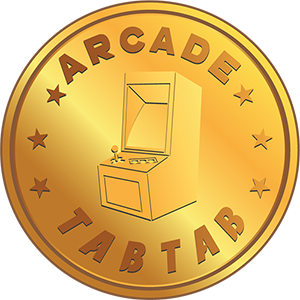 TabTab ARCADE is a utility tokens use to reward users for playing games and watching video ads. Advertisers use ARCADE tokens to run ads on TabTab.

ARCADE tokens, the cryptocurrency issued by TabTab Mobile Gaming Platform maintains a total issuance volume of 2 billion. After buy-back disposal, it will be a constant - 1 billion.

As a decentralized cryptocurrency issued on the Stellar blockchain, ARCADE can be added to any Stellar wallets with the following trustline:
Issuer Account ID: GD4V2GTFSTE2N4PJPJLIHT2BWXZMC2KG6PLWZCM6SJ6GAZ3VCBQHECPZ
Asset Code: ARCADE

For Example: Advertiser wants to reach 1,000 users. If it costs 1 ARCADE token for every unique video views, then it would cost the advertiser 1,000 ARCADE tokens to show their video on TabTab.

When users play a game on TabTab a video ad is played. We take the ARCADE tokens that advertisers paid and use a portion to reward the top TabTab contest winners.

Can be purchased directly from any Stellar Decentralized Exchange including in the TabTab Mobile App, Stellarport.io, Interstellar.Exchange, and others. 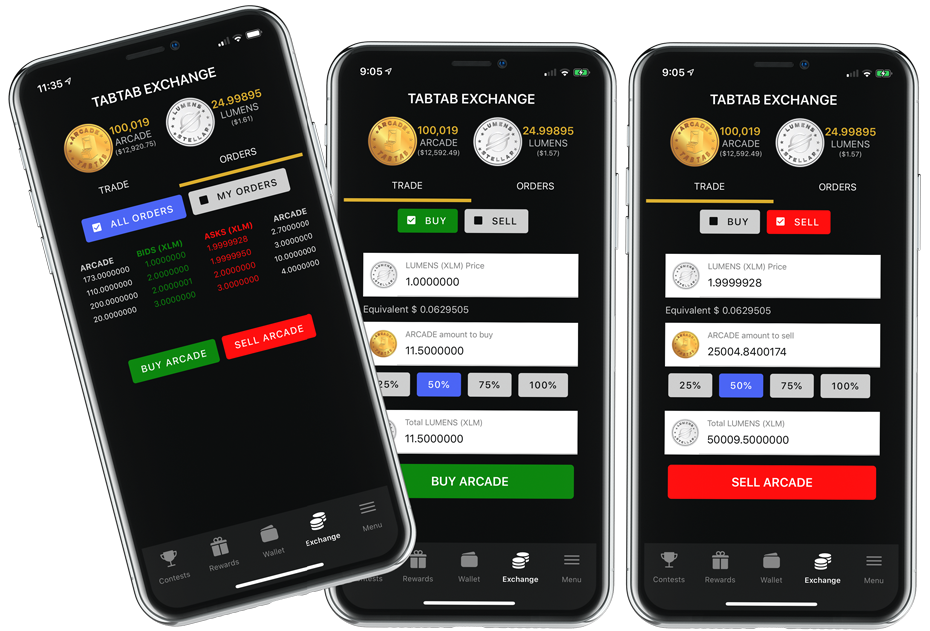 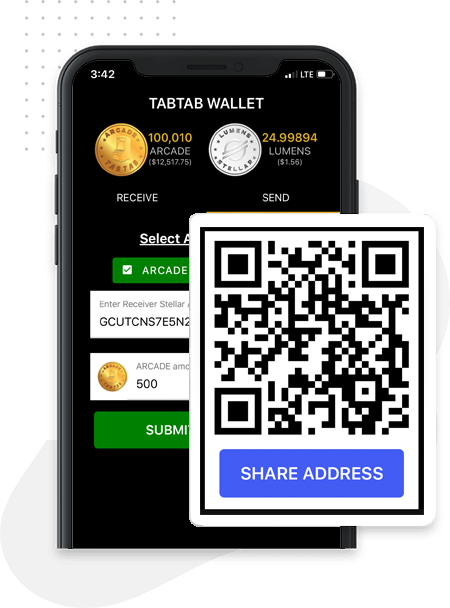 Receive TabTab ARCADE tokens and Stellar Lumens (XLM) with the built-in TabTab crypto wallet. Use the QR code for easy access to your wallet address for sender to scan.

Send TabTab ARCADE tokens and Stellar Lumens (XLM) to any external wallet that supports the Stellar blockchain. Scan the receiver's QR code to easily copy their wallet address to send to.

Trade Cryptocurrency with other users

Users can trade ARCADE tokens and Stellar Lumens with each other right in the TabTab mobile app.

We use the Stellar decentralized exchange protocol so trades are directly between users.

Tokens are transferred to your TabTab wallet instantly on completed orders.

TabTab is available to users worldwide. Therefore, trades can potentially be with international users. 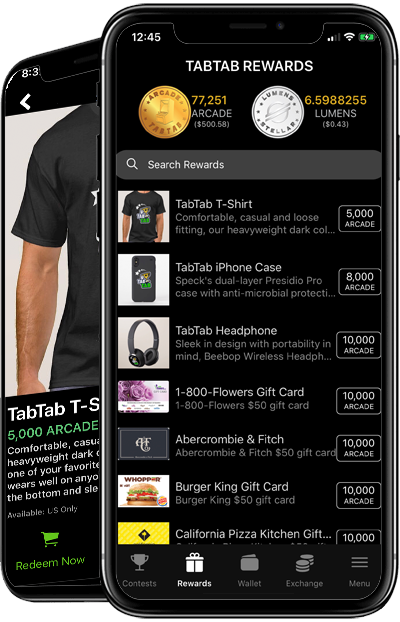 Use your ARACDE reward tokens to redeem for products like tee-shirts, phone cases, headphones, hats, games and more.

Use your ARCADE reward tokens to redeem from hundreds of selections of gift cards like 7-Eleven, Subway, Starbucks, Jamba Juice, Amazon, and more.

Use your ARCADE reward tokens to redeem event tickets for concerts, movies, festivals, clubs, and more.

TabTab, is a mobile eSports gaming platform, connecting the 2.4+ billion mobile gamers around the world through mobile games, contests, rewards, cryptocurrency, and prizes.

The concept behind TabTab is that you watch targeted video ads that interest you. You get rewarded for watching the video ads and for joining mobile gaming contests. You get rewarded with a cryptocurrency called "ARCADE" tokens for watching videos and getting top scores in the mobile games. The ARCADE reward tokens are stored in the TabTab wallet where you can send, receive, or trade with other users. You can also use the ARCADE reward tokens to redeem or partially pay for prizes in the TabTab marketplace.

Today, mobile games account for 33% of all app downloads, 74% of consumer spend and 10% of all time spent in-app. It’s predicted that in 2019, 2.4 billion people will play mobile games around the world — that’s almost one-third of the global population. In fact, 50% of mobile app users play games, making this app category as popular as music apps like Spotify and Apple Music, and second only to social media and communications apps in terms of time spent. 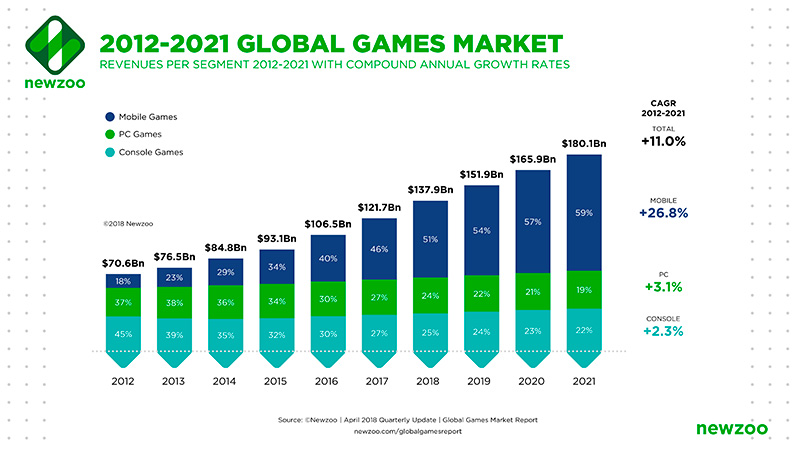 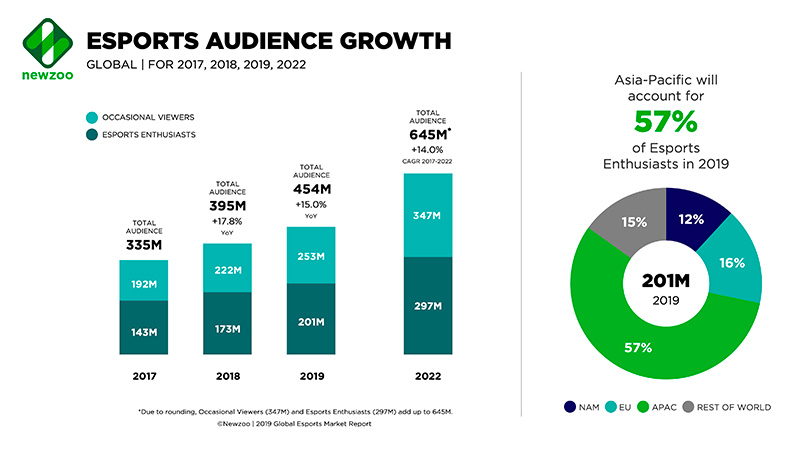 Newzoo: Mobile Revenues Account for More Than 50% of the Global Games Market as It Reaches $137.9 Billion in 2018 TechCrunch: Mobile gaming is a $68.5 billion global business

Cryptocurrencies makes it easy to transfer funds directly between two parties in a transaction, without the need for a trusted third party such as a bank or credit card company; these transfers are facilitated through the use of public keys and private keys for security purposes. Fund transfers are done with minimal processing fees, allowing users to avoid the steep fees charged by most banks and financial institutions for wire transfers. 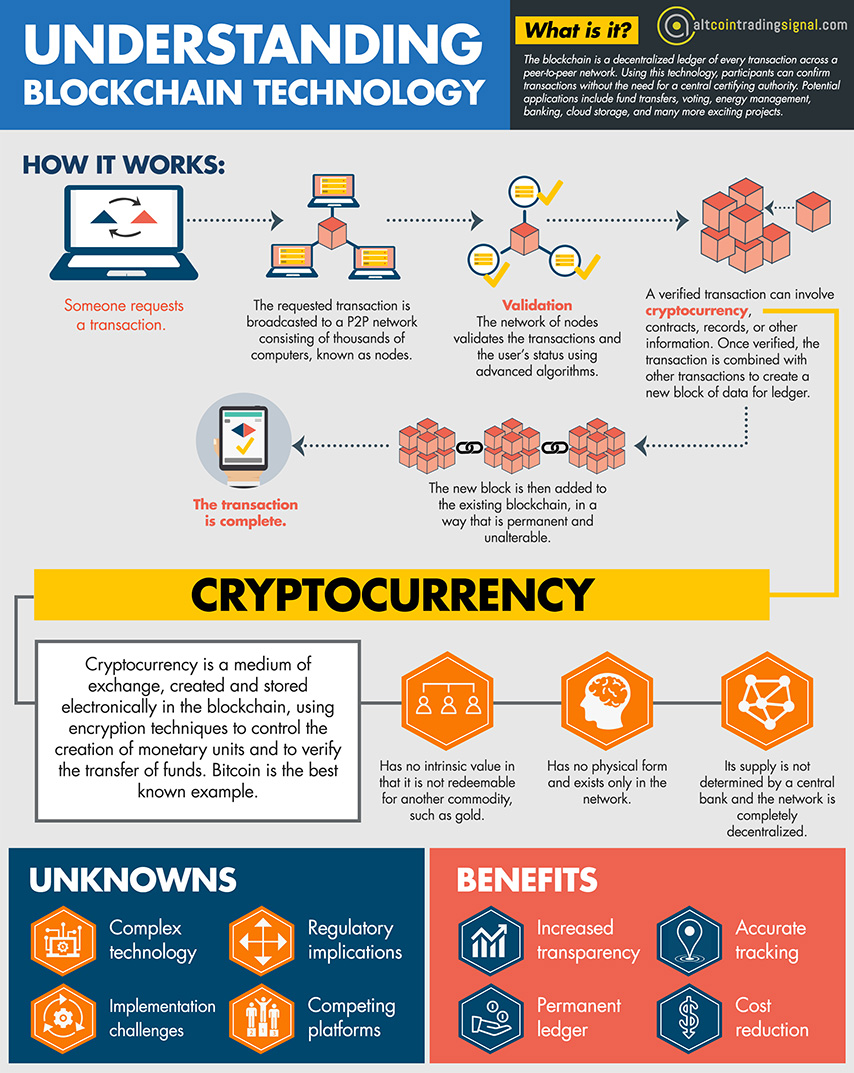 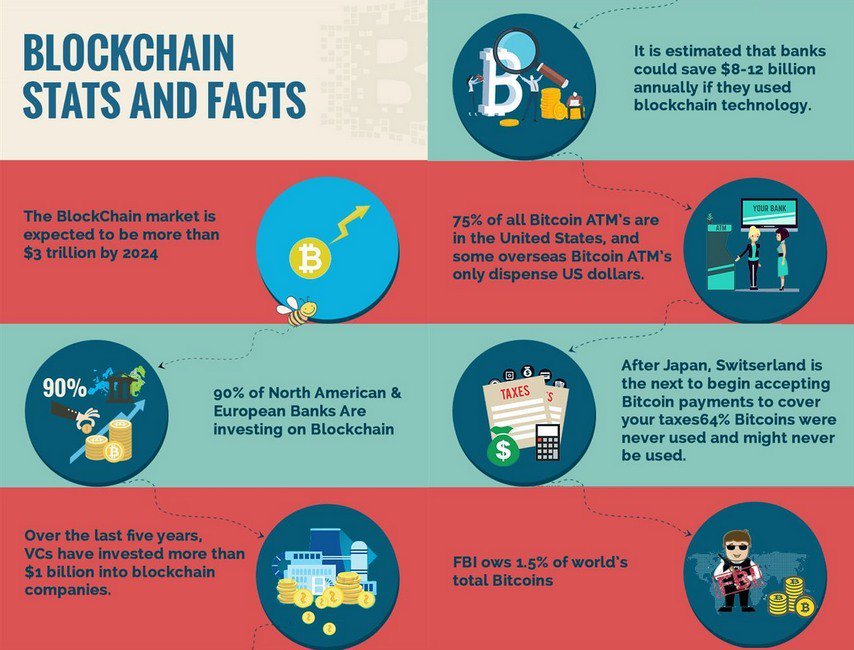 What is TabTab ARCADE tokens?

TabTab ARCADE is a blockchain-based utility token for mobile gaming video reward advertising. It improves the efficiency of digital video reward advertising by creating a new unit of exchange between game developers, advertisers and players. The token can be exchanged by developers, advertisers and players. It all happens on the Stellar blockchain.

TabTab is a blockchain-based advertising system, that aims to change how video reward ads are served. It is built on top of the Stellar blockchain and uses a mobile app called TabTab. TabTab is a contest-based platform for mobile games designed to reward users for watching video ads and playing games. TabTab utilizes blockchain technology to reward users for every video ad views, mobile game plays, and top scores. TabTab ARCADE aims to display fewer disruptive in-app video and yet maximize viewing participation rewards.

TabTab ARCADE improves the efficiency of digital video reward advertising by creating a new unit of exchange between developers, advertisers and users. It all happens on the TabTab network that’s built on top of the Stellar blockchain. The value of the token is based on user video views, which simply means the number of eyeballs watching video ads. TabTab users can pay to block video ads or view video ads and earn ARCADE tokens in exchange. On the other hand, advertisers achieve higher returns on investment through better target specifics and reduces fraud. All this happens while the anonymity of the user is ensured.

Why the Stellar blockchain?

What is Stellar?
Stellar is a multi-currency payment backend that tens of thousands of people use every day. It’s decentralized, open-source, and developer-friendly, so anyone can issue assets, settle payments, and trade.

Stellar is a blockchain, but it works more like cash—Stellar is much faster and cheaper than bitcoin, for example. And it uses far less electricity.

Stellar is a global, rather than a national, payment system. So users can transcend their local economy and interact directly with the world market. On Stellar, a person’s limits aren’t defined by borders—anyone on earth can own, hold, and send dollars, or euros, or yen, for example.

Stellar is a network of peers. It lets any user talk (transact) with any other user. So, for example, banks can work directly with one another, rather than “corresponding” through middlemen.

Stellar is ownerless and belongs to everyone. No one organization controls the network, so no one can shut it off, monopolize its functionality, or hoard its data.

Stellar handles any asset. Unlike many distributed systems, Stellar is currency agnostic. In fact, Stellar’s most important feature is that tethering a token to a traditional asset like a dollar is easy. So Stellar can support all the currencies that the world cares about, not just crypto.

Stellar is cheap. In fact, transactions are nearly free. Low fees mean more benefit for Stellar’s users. And Stellar’s low cost opens up use cases, like micropayments, that aren’t feasible with other systems.

Our main reasons for choosing Stellar:

Stellar decentralized exchange
Once an asset is issued on Stellar it can be traded using the Stellar DEX. The DEX provides pairs between any 2 assets available on Stellar. 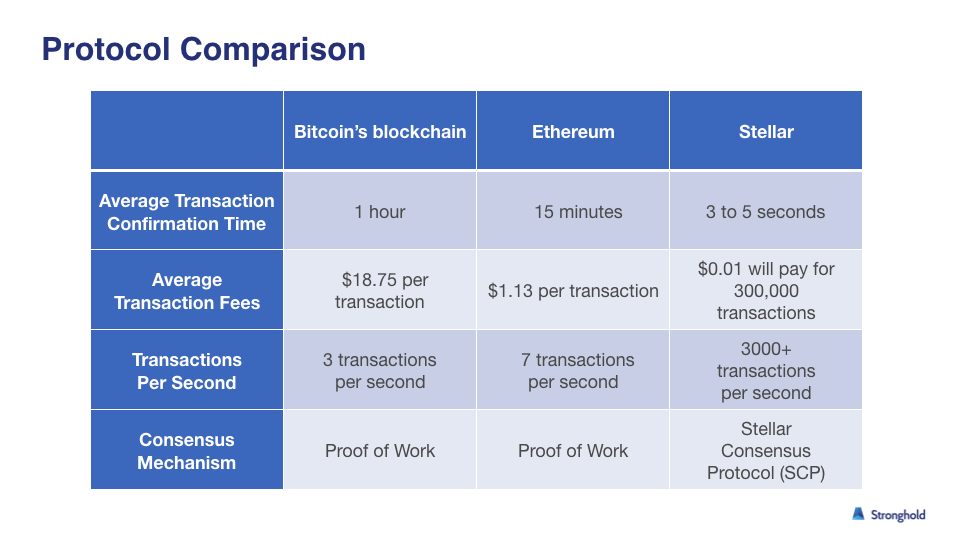 What are your plans for TabTab?

Our upcoming roadmap is to acquire users through various channels and continue to add more games. We will also be focusing on adding mobile ad partners so we can offer more ARCADE reward tokens to our users. 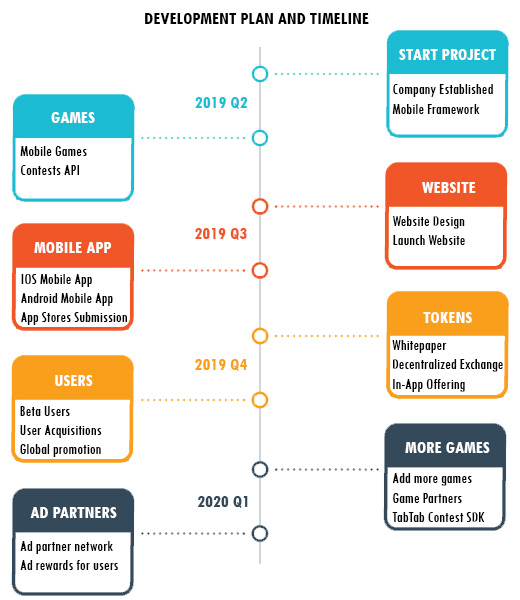 What is your revenue model?

Digital video on mobile devices accounts for 63% of digital ad revenue. Tapping into the mobile marketing budgets of our Ad partner network, where we as a company and the participant can mutually benefit.

We play a 30 second video ad when a user join a game contest. Advertisers pays us for that advertising slot on the TabTab mobile app. We use a portion of the ad revenue to reward users with ARCADE tokens for playing the game, and getting top scores.

For Example:
Advertiser wants to reach 1,000 users.
If it costs 1 ARCADE token for every unique video views, then it would cost an advertiser 1,000 ARCADE tokens to show their video on TabTab.

When users play a game on TabTab a video ad is played.

We take the ARCADE tokens that advertisers paid and use a portion to reward the top TabTab contest winners. 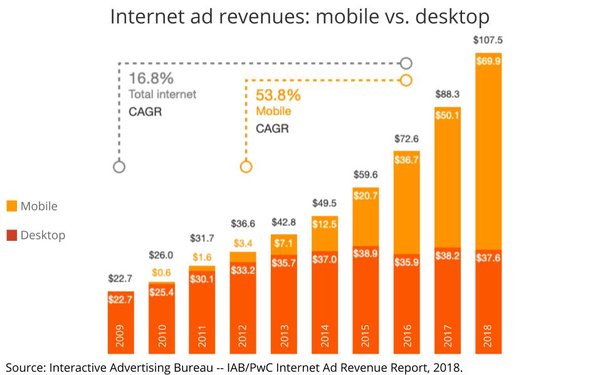 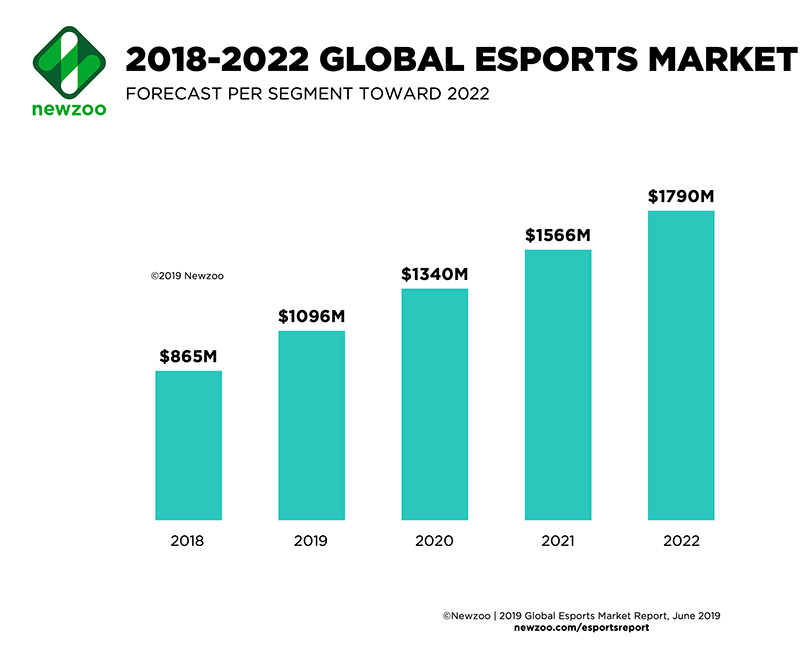 How could I get started?

2. Find the game you want to play, join the contest and start playing. 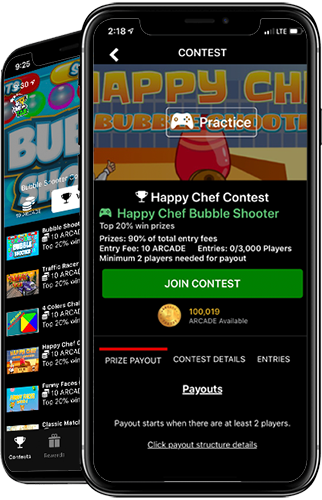 How do I trade ARCADE tokens for $USD or other fiat?

2. Trade your ARCADE tokens for Stellar Lumens (XLM) in the TabTab decentralized exchange. 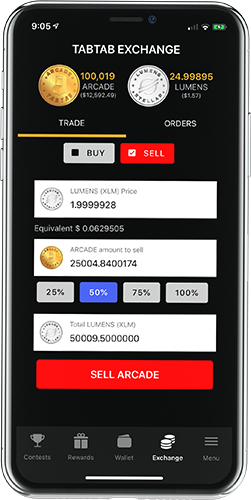 3. Send Stellar Lumens (XLM) to an exchange that supports Stellar. 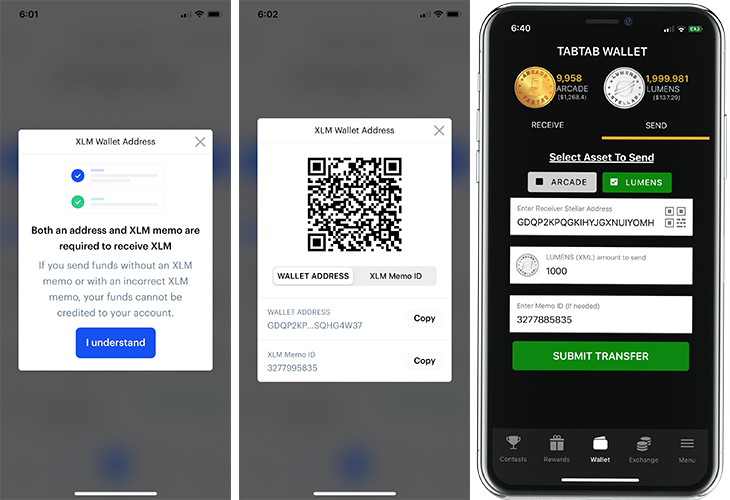 Visit CoinMarketCap for list of exchanges that supports Stellar

TabTab, is a mobile gaming app available for Android and iPhone. Download app today and start competing for prizes, earn and trade cryptocurrencies. 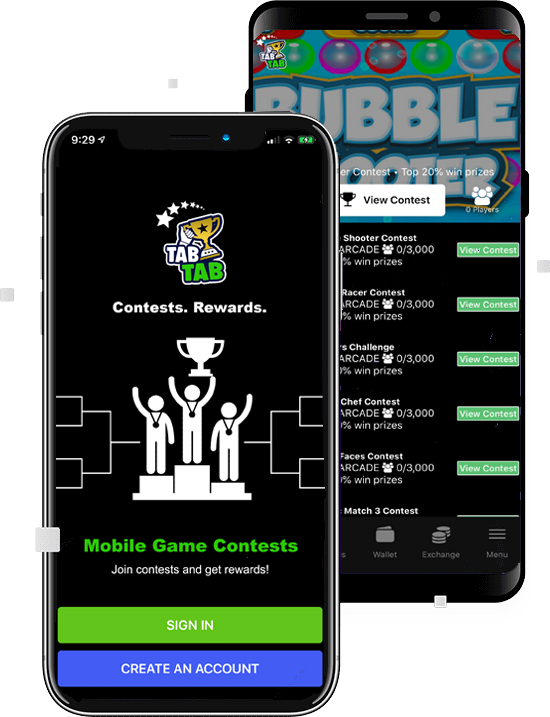 Have questions, potential partnerships, or other opportunities please do contact us by filling out the form below.